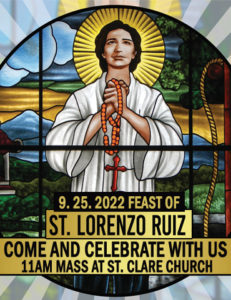 St. Clare of Assisi’s Filipino Ministry invites you to celebrate and honor

THE FEAST DAY OF SAN LORENZO RUIZ  on Sunday, September 25th at 11am Mass

A little bit about San Lorenzo Ruiz:  He is the first Filipino venerated by the Roman Catholic Church.  He was born in Binondo, Manila in the Philippines around the year 1600, of Filipino-Chinese parentage, he was raised Catholic and served his parish church as an altar server and calligrapher.  He became the Philippines’ protomartyr after his execution by the Tokugawa Shogunate during Japan’s persecution of Japanese Christians in the 17h century.

COME AND JOIN US FROM SEPT. 16th to SEPT. 24th. FOR SAN LORENZO NOVENAS that will be said after the 9:00AM WEEKDAY MASSES AT ST. CLARE CHURCH.